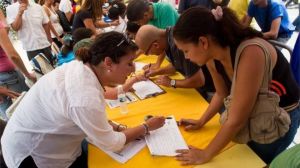 The collection of signatures for the recall referendum has been postponed by the National Electoral Council in response to injunctions from several State-level courts. Also, the opposition-held National Assembly, in an extraordinary session on Sunday October 23rd, declared themselves in open rebellion against the government, the Supreme Court and the National Electoral Council.

These are the facts:

On October 20, several criminal complaints were filed in state courts for the following offenses typified and sanctioned under Articles 320, 322, 323 of the Venezuelan Penal Code and 230 of the Organic Law for Electoral Processes:

1. False attestation before a public official;
2. Benefiting from a false act;
3. Providing false information to the Electoral Branch.

As a result, the courts issued two precautionary measures:

1) They ordered the National Electoral Council to freeze the effects that may have been generated by the process of the collection of the 1% of signatures of voters in the electoral registry in favor of a presidential recall referendum that was carried out between June 22 and 24, 2016.

2) They issued a preventive ban from leaving the country to a determined group of citizens in each respective state until the investigation is complete.

The National Electoral Council complied with the court orders and has stopped the process of signature collections (20% of voters in the electoral registry) scheduled for October 26-28, until further court instructions. Meanwhile, the Attorney General’s Office has appointed Special Prosecutors to lead the respective investigations.

These investigations are being carried out respectful of due process and of the right for defense of the involved parties. As is known, under any judicial system, precautionary measures are adopted before or during a judicial process (before the sentence), with the intent of guaranteeing the exercise of a right, suppressing the risks that may exist during the process. These measures have been adopted fully respecting the principles of the primacy of law, of equality before the law, of separation of powers, of no arbitrariness, and procedural transparency.

Earlier this year, the Democratic Unity Roundtable presented the National Electoral Council with 1,957,779 signatures of which 605,727 were found to be fraudulent according to electoral authorities. Of these, 10,995 belonged to deceased voters; 53,658 belonged to persons that do not appear in the electoral registry; 3,003 belonged to persons that have not reached voting age; and 1,335 belonged to voters serving sentences for serious crimes (murder, drug trafficking, robbery, fraud, and sexual abuse) during which their voting rights are suspended according to Venezuelan law.

Opposition lawmakers, who control the National Assembly, in an extraordinary session on Sunday October 23rd, declared themselves in open rebellion against the President, the Supreme Court and the National Electoral Council, calling for street protests and the impeachment of President Maduro, and calling the Venezuelan Armed Forces to disobey the constitutional government.

However, Venezuela’s Supreme Court ruled last January 2016 that all actions of the opposition-held National Assembly are void since the Assembly disobeyed a court order forbidding the swearing in of three members whose election processes are being reviewed by the Court under charges of possible electoral irregularities.

Some sectors within the opposition may be preparing for a scenario of violence. Last week October 18th, former councilman José Vicente García Ramírez from the far-right party Voluntad Popular (Leopoldo Lopez’ party) was arrested while carrying heavy weapons, military uniforms and grenades. Governor Vielma Mora from Táchira State has denounced García as being involved in the organization and financing of acts of street violence, vandalism and terrorism in his home State.

Back in 2014, from February to June, Venezuela experienced a period of violence and terrorism by individuals whose stated goal was to force “La Salida,” (the Exit or Way Out) of the elected government. Politicians from the far-right party Voluntad Popular orchestrated the events, in which 43 people (33 civilians plus 10 law enforcement officers) died. Many of the victims died by gunshots, between opposition and pro-government sympathizers, motorcyclists decapitated when they ran into traps consisting of barbed steel wires placed across intersections by opposition groups. Many public institutions and private properties were vandalized. Targeted locations like hospitals, universities, buses, and even a children’s daycare center for government employees, were victim of bombings.