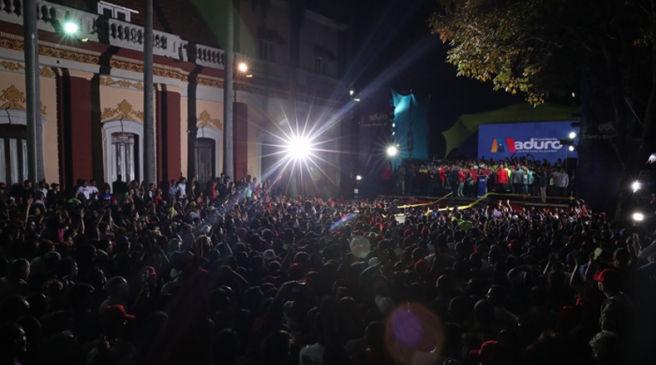 On May 20, 2018, the Bolivarian Republic of Venezuela held Presidential, Municipal and State Legislative elections. By far the biggest result was the reelection of President Nicolás Maduro for a new term (2019-2025) with over 6,192,000 votes or almost 68% of all valid votes. The Venezuelan Electoral Council reported participation at 46%.

Twenty four times in twenty years Venezuelans have used ballots and elections to legitimize its new constitution, authorities and public policies. No other country in the world can claim this level of democratic participation and no national or international entity has proven that Venezuelan electoral authorities or the party in government has rigged or stolen any of these twenty-four elections. In fact, Eugenio Chicas, a spokesperson for an international group of observers affirmed that: “… criticism against the electoral process is based on political and not on technical grounds.”

As a solidarity organization in Boston, Massachusetts, committed to supporting the self-determination of the people of Venezuela, The Greater Boston – Venezuela Solidarity Committee:

1. Repudiates the constant attacks of the government of the United States of America and its surrogates against the democratically elected authorities of Venezuela and its people. Such attacks aim at weakening the popular support of the Maduro government in order to justify a diplomatic and even a military intervention to force a “regime change.” Through this, U.S. corporations would then be able to considerably increase its control of the largest oil reserves on the planet and the oil markets on a global scale. U.S.-backed “regime change” would also advance U.S. imperialism’s strategic agenda of rolling back and defeating left-leaning governments throughout Latin America. As a solidarity organization we will respect the will of the Venezuelan people and the authorities that they so freely choose in accordance with the Venezuelan Constitution.

2. Denounces the criminal and brutal economic sanctions against the people and sovereign government of Venezuela imposed by the current U.S. administration. Such sanctions include a freeze on more than $12 billion of assets of the Venezuelan state owned oil company, PDVSA, in the U.S. These sanctions also include an embargo on exports of essential goods to Venezuela, including food and medicine with the banning of the purchase of the new Venezuelan virtual currency, The Petro (supported by Venezuela’s own oil reserves and sanctions against individual Venezuelan officials), and a travel ban imposed on Venezuelans applying for new U.S. visas. These measures are part of the Trump administration’s strategy to hurt the Venezuelan economy and to generate social unrest. They also represent a clear psychological and material attack on the people of Venezuela and an effort to diminish the Maduro administration and prepare conditions for a direct foreign intervention in Venezuela. As a solidarity organization we demand that U.S. elected officials cease intervention in the internal affairs of Venezuela, in accordance with international law, and work to end the criminal embargo that negatively impacts the most vulnerable people in Venezuela.

3. Reaffirms to Venezuelans– inside and outside of the country, that we are witnesses to the many social and political improvements that the Venezuelan model of democracy has brought to historically marginalized Venezuelans, starting with the presidency of Hugo Chávez in 1999. We promise to support Venezuelan efforts at the community level to organize for self-sufficiency and stewardship of the environment. We will continue with our “Seeds of Solidarity” project that provides non-GMO seeds to community growers in Caracas and the province of Lara.

4. Reminds other Latin American governments and citizens, especially migrants now living in this country, that the common threat to our unity and prosperity as Latin American countries is the government of the United States of America. U.S. interests on hundreds of occasions have occupied, stolen, and polluted our natural resources, assassinated our leaders, and mistreated our nationals here in the U.S and even kidnapped citizens from our own countries. It is up to us to educate our own people about the imperialistic nature of the U.S. and to organize and fight back in order to earn the respect that we all deserve. We commit ourselves to educate and engage our local communities in actions and campaigns in solidarity with the Venezuelan people.

5. AND FINALLY, Assures the Venezuelan people and its legitimate authorities that we will support their self-determination as expressed at the ballot box in these May 20th elections. We will prepare and send a delegation of volunteers to Venezuela this November, 2018 to personally convey our firm support, accompany our “Seeds of Solidarity” partners, educate ourselves in the current situation in Venezuela, and return to the U.S. to educate and engage our neighbors in constructive actions in support of the Venezuelan people.