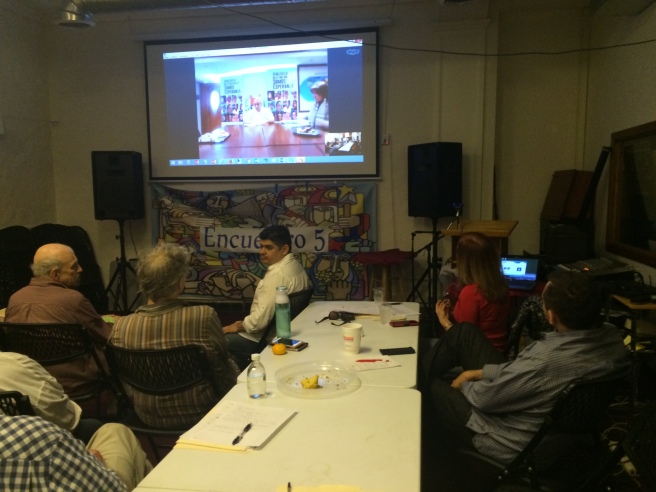 On June 4, 2016, members of the Venezuela Solidarity Committee of Boston, had the opportunity to hear a report from Venezuelan Congressman Vivas (PSUV), about the delicate situation the Venezuelan people confront at this moment. The video conference lasted for about an hour and a half and people in the audience had an opportunity to ask questions and share views about the subject matter.

Congressman Vivas explained the constitutional mechanisms of referendums in Venezuela, and in particular about what the right-wing is seeking, a presidential recall referendum. Vivas indicated that there will be no chance of such referendum this year, since the legal procedure for it has not been fulfilled by the right-wing opposition.

He also explained that the tactics being used by the right-wing are consistent with the path chosen in Paraguay, Honduras and Brazil, a combination of violence and congressional impeachment of presidents. He doesn’t doubt that the United States is behind these moves. In fact, the Obama administration set the foundation for the overthrow of the government in Venezuela when U.S. President Obama declared last March 9, 2015, by Executive Order, that Venezuela was a “national security threat.” For the U.S. declaring a country as such threat is the first step toward starting a U.S. sanctions program. At that time, Obama also demanded that Venezuela release what they call “political prisoners.” Vivas said that “there are no political prisoners in Venezuela. What we have is politicians in prison, not because of what or how they think, but rather because they have committed serious crimes.”

Vivas thanked the Venezuela Solidarity Committee for its work and suggested that it would be important for friends of the Bolivarian Revolution in the U.S. to convince President Obama that Venezuela poses no threat for his country. At the VSC we appreciated getting information first-hand and understood clearly that the commercial media in the U.S. and around the world are presenting a completely biased coverage of the problems in Venezuela. We will continue to promote this type of informational video conferences to counter anti-Bolivarian Revolution press coverage.