The Bolivarian Republic of Venezuela repudiates and protests the decision by the government of the United States of America, of imposing sanctions against Venezuela’s Head of State, Nicolás Maduro Moros, consummating a serious violation of International Law, and an infringement upon his human rights, constituting an unfriendly action against Venezuela. Likewise, it rejects the insolent and distempered remarks of the National Security Adviser to the White House, H.R. McMaster.

These sanctions constitute a retaliation against President Nicolas Maduro for having convened the electoral process of greatest magnitude in recent times in Venezuela, for deepening democracy and sovereignty through the activation of the original constituent power, for being a defender of the dignity of Latin America and the Caribbean, and for fiercely opposing white supremacy in the U.S. presidency and its Ku Klux Klan vindicating racism.
END_OF_DOCUMENT_TOKEN_TO_BE_REPLACED

The event organized by the Venezuela Solidarity Committee on July 29, 2017, was a successful display of solidarity with the Bolivarian Revolution. The event was entitled “Affirming Life in Venezuela, Seeds of Solidarity” and was co-sponsored by the following organizations, the International Action Center, CISPES Boston, the July 26 Coalition, Encuentro5, Chelsea Uniting Against the War, Socialist Party, Party for Socialism and Liberation, Communist Party – Boston Branch, Boston May Day Coalition, United for Justice with Peace, Alliance for a Secular and Democratic South Asia, Workers World Party Boston, Democratic Socialists of America. Their statements of solidarity with Venezuela can be read here.

As part of the program there were songs by Ali Primera, interpreted by Sergio Reyes, a report on current situation in Venezuela by Omar Sierra, a video recorded in Venezuela, a report from the recipients of our seeds of solidarity already sent (the video can be seen in YouTube here), and a presentation by Jorge Marin, member of the VSC, about our work and the need to demand that our country, the United States, stop its intervention in Venezuela in support of the right-wing opposition.

There was also a rich discussion during the questions and answers period. In general, all present expressed their support for our people-to-people solidarity campaign, and their support for social change campaigns started by the Government of President Hugo Chavez, and continued by Nicolas Maduro.

A generous amount of money was collected towards buying and sending organic, non-gmo seeds to our friends in Venezuela. Our thanks to all who attended and supported this event. 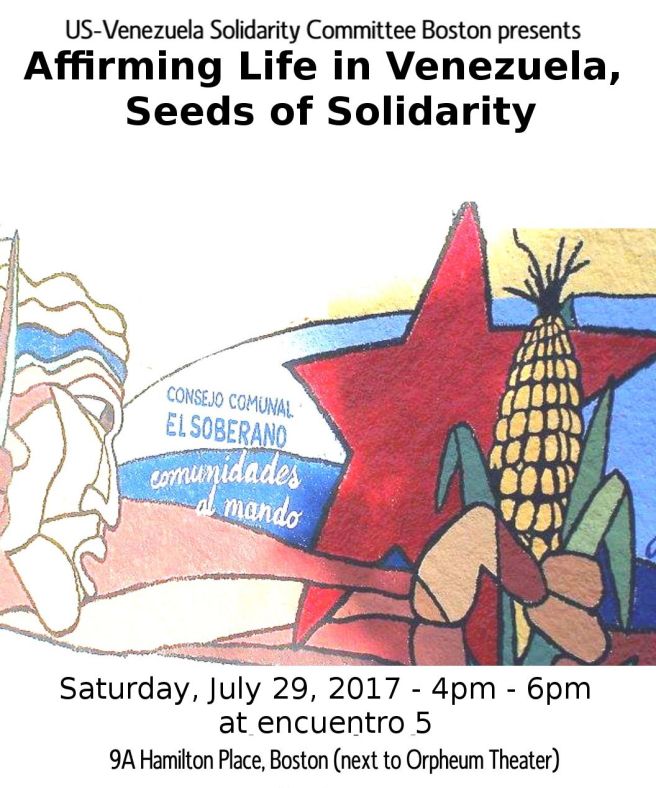 * Sergio Reyes, Musical introduction. The music of Ali Primera
* Omar Sierra, Venezuelan Consulate, Report on Situation in Venezuela
* Video: Seeds of Solidarity, a report from Venezuela about their food sovereignty efforts and the importance of our people-to-people solidarity
* Jorge Marin, Our committee work against U.S. intervention in Venezuela

Seeds of Solidarity for Venezuela, a project of the Venezuela Solidarity Committee of Boston, is committed to supporting a growing grassroots movement in Venezuela that has emerged with the goal to achieve food sovereignty. We provide organic heirloom seeds to farmer organizations and urban agricultural collectives that are involved in self-reliance and food security initiatives in low income rural and peri-urban areas of Venezuela’s Lara State.

This is a people-to-people campaign.

September 10, 2016October 31, 2016 ~ vsceditor1 ~ Leave a comment
by Duncan McFarland, US-Venezuela Solidarity Committee
These are difficult times for Venezuela economically and politically.  The socialist government of Maduro is in a crisis situation; the US government is trying to take advantage by applying pressure to support the right wing opposition.  The goal is regime change to a neoliberal government or other US friendly regime.  Transnational capitalist corporations are also involved in this effort.  This is the reason that Obama ordered emergency sanctions against Venezuelan officials in 2015, which were subsequently supported by Congress on the basis of a national security threat.  Travel and financial restrictions are in place against a number of leaders; but the actual impact involving a few people is not very significant.  However, by labelling Venezuela a danger to national security, the US hegemonists create a cover in public opinion for US intervention, which is possible in different ways — covertly as well as militarily.  The sanctions are also a way of legitimizing the right wing in Venezuela as global neoliberalism signals approval of their political program which includes violent confrontations.  By having Congress sign on to the sanctions with a large majority, Obama has got commitments and support from both the Republican and Democratic parties.  The US attempt to isolate Venezuela in the Organization of American States is another example of attacking and pressuring the Maduro government.
END_OF_DOCUMENT_TOKEN_TO_BE_REPLACED
August 16, 2016October 31, 2016 ~ vsceditor1 ~ Leave a comment

Boston, MA – Confronted with a food distribution emergency, working people of Venezuela have opted to confront the emergency with action. A growing community-based movement has emerged with the goal to achieve food sovereignty. In that process many farmer organizations and urban agricultural collectives are growing organic products, using non GMO seeds. This effort has been supported by the enactment of public policies, such as the Seeds Law, a legal framework that promotes the use of traditional non GMO seeds, and the creation of the Department of Urban Agriculture.

At the initiative of former President Chavez, Venezuela has provided support to economically disadvantaged communities in the US through the years. Since 2005, Venezuelan-owned CITGO Petroleum Corporation has provided millions of gallons of heating oil to the homes of thousands of families (1.8 million people) to keep warm during the cold winter months, in 25 states, the District of Columbia and many Indigenous reservations and homeless shelters. CITGO has also supported environmental initiatives and coastal restoration efforts in the communities affected by hurricane Katrina in Louisiana, leading volunteers in restoring 81 acres of coastline and wetlands; planting more than 70,000 trees. CITGO has funded numerous social projects in the Bronx, New York, from worker-run and food cooperatives to environmental justice, youth cultural programs, ESL classes and women of color collectives. END_OF_DOCUMENT_TOKEN_TO_BE_REPLACED