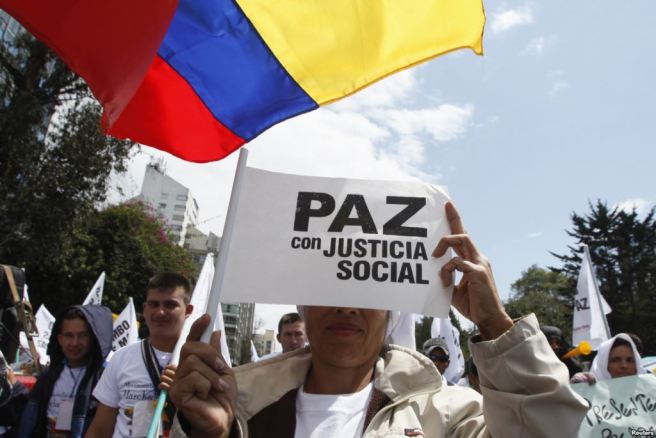 11/28/2016 — The VSC co-signed the following letter of solidarity with Colombian people. This was an initiative of Alliance for Global Justice (AFGJ).

It is with deep sorrow that we write to express our condolences for the recent assaults against your organizations and against the entire process for peace. We have learned that 72 human and labor rights defenders, peace activists, indigenous leaders and environmentalists were assassinated in 2016 alone. In the four years of its existence, 125 members of the Marcha Patriótica (Patriotic March) popular movement for peace have lost their lives. We are dismayed by the campaign of paramilitary violence that has occurred leading up to and following the October 2nd Peace Referendum. We are especially shocked by Operation Extermination, carried out by death squads between November 17 and 20. Five persons were murdered and attempts were made against three others. All of those targeted were members of the Marcha Patriótica, and all but one were affiliated with the National Unitary Federation of Agricultural Workers Unions (Fensuagro), the largest labor organization within the Marcha Patriótica. We are also deeply concerned to learn that two insurgents of the Revolutionary Armed Forces of Colombia-Peoples Army (FARC-EP) were killed November 13 in a non-combat situation by Colombian Armed Forces snipers. This is a violation of the ceasefire and a provocation against the peace process. Meanwhile, we have received new notices of a series of new paramilitary threats directed against leaders and members of the Marcha Patriótica, Fensuagro and various similar popular organizations.

We denounce the political violence of the extreme right wing in Colombia and we denounce our own United States government’s history of fomenting Colombia’s war and repression. We denounce transnational corporations that reap profits backed in part or in whole by paramilitary activities and the displacement of rural, indigenous and Afro-Colombian communities. We denounce the inaction of the Colombian government to prevent these attacks and bring the perpetrators and intellectual authors to justice. We demand that the Colombian state provide adequate protection for Fensuagro and the Marcha Patriótica leaders under threat, and for all targeted social movements. We condemn the Colombian government’s failure to deal decisively with the links between political and business leaders and paramilitary organizations. Those who encourage, fund and/or carry out assaults against unionists and human rights defenders have one aim: to derail the peace accords by the spilling of blood.

As citizens and residents of the United States we bear great shame for the negative role our own government has played. In 1962 the Pentagon’s Yarborough Commission urged the Colombian government to develop “a civil and military structure….to… perform counter-agent and counter-propaganda functions and as necessary execute paramilitary, sabotage and/or terrorist activities…. It should be backed by the United States.” And back it we did, spending more than $10 billion in tax dollars to support war and repression through Plan Colombia. Similarly, both US government monies and payouts from corporations like the United Fruit Company, Chiquita Banana, Coca-Cola and Drummond Coal have been directed and redirected to paramilitary death squads and/or their patrons. Even now, as the world hopes for the success of the Colombian peace accords, the US is proposing to increase military aid to Colombia. With the ascendency of Donald Trump to the office of president, our nation will be led by a man who has spoken enthusiastically about expanding the use of torture in military interrogations. This sends a signal to Colombia and all US allies that human rights abuses will be tolerated rather than discouraged. Our actions of solidarity must include changing US policy toward Colombia and Latin America.

Here in the United States, there is a phrase we want to borrow from the Black Lives Matter movement. It is used in response to racist repression at the hands of the police. It is not enough to know that yet another person has been killed without just cause: the movement demands, “Say their names!” Likewise, we must do more than denounce the assaults and killings in Colombia in a general sense. We must recognize that these are real people, real lives lost, leaving real scars of emptiness and loss in the hearts of families, friends, unions and communities.
We must SAY THEIR NAMES:

Finally, we commit to you our solidarity and want you to know that you are not alone in your dreams of a better country and a better world. Your struggle is ours. We know that if you the people of Colombia can bring to an end these more than five decades of war, your light will shine as an example across the planet. We are confident that despite these losses, the seeds of your labors and your lives will one day bear the fruit of liberation and a just peace. Even now, despite all, that fruit is ripening.